The outputs (channels) of CSMIO/IP-M and CSMIO/IP-S step/dir controllers are based on DS26LV31 differential line transmitters, which means that these controllers generate a differential step/dir signal. Differential signals have become an industrial standard due to the fact that they enable high-frequency transmission while maintaining high resistance to 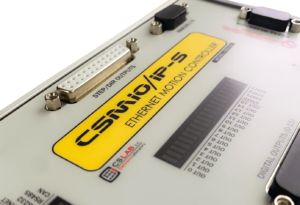 Unfortunately, due to a lack of knowledge of the specifics of differential signals, carelessness, and bad habits when connecting single-ended or OC signals, users sometimes damage the step/dir outputs in the controllers.

If you do this out of distraction or rush, the step/dir output may be damaged, and your machine will behave strangely:

To verify whether the step/dir output of a CSMIO/IP controller is damaged, you can do simple but professional diagnostics using one LED and one resistor.

The test consists of the 4 steps:

Then move the axis very slowly to see the LED flashing. If the LED is constantly on, reduce the number of pulses per mm, which will lower the LED flashing frequency. When you notice that the LED is flashing, go to the next step, if not the “step” output is damaged.

When you notice that the LED is flashing, go to the next step, if not, the “step” output is damaged.

Then make a few short axis movements in the positive and negative directions. When the LED goes on and off with the change of axis movement direction, go to the next step, if not, the “dir” output is damaged.

Social Chat is free, download and try it now here!